Our primary mission in tobacco is to reduce the harm caused by smoking by bringing our VLN® reduced nicotine content tobacco cigarettes – containing 95% less nicotine than conventional cigarettes – to adult smokers in the U.S. and international markets.

For the latest information on VLN® King and VLN® Menthol King, visit www.tryvln.com.

Our VLN® King and VLN® Menthol King cigarettes are the world’s first and only combustible cigarettes to receive Modified Risk Tobacco Product authorization from the U.S. Food and Drug Administration (FDA). In granting the designation, the Agency established that VLN® cigarettes – which smoke, taste, and smell like a conventional cigarette – “help reduce exposure to, and consumption of, nicotine for smokers who use them.”

With FDA’s MRTP authorization, we can now communicate the key features of VLN® cigarettes:

These features are critically important because nicotine has long been known as the primary addictive chemical in cigarettes.

VLN® cigarettes are made with 22nd Century Group’s U.S. grown tobacco – which is specially developed to have 95% less nicotine, compared with Big Tobacco’s standard high-nicotine tobacco. For decades, Big Tobacco has manipulated, formulated, created, and marketed products with the intention to create and sustain addiction to nicotine. During that time, we have collaborated with world-class scientists to develop a product that is the exact opposite. VLN® is the first cigarette in the world that is not designed to create or sustain nicotine addiction. 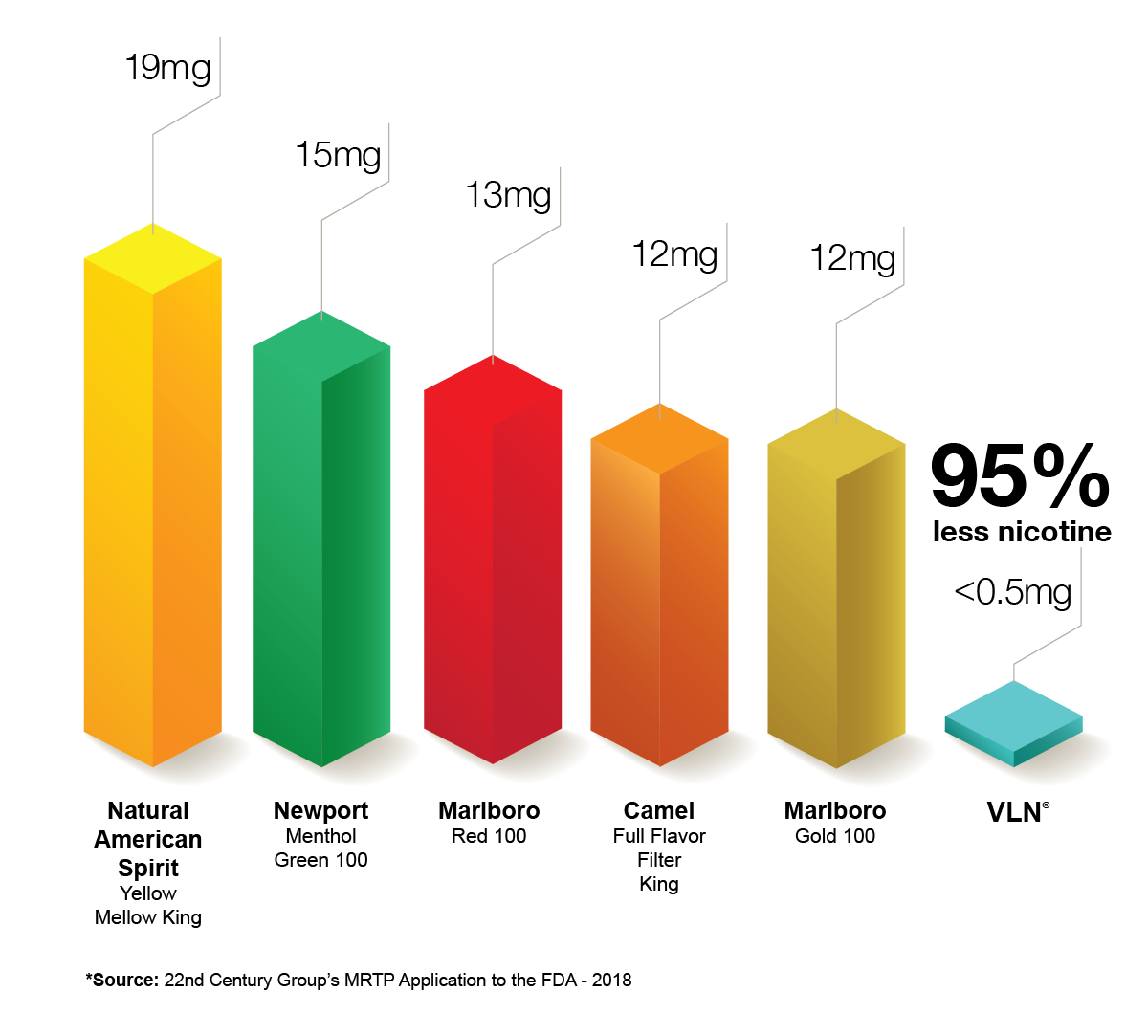 The FDA has stated that a nicotine cap, as part of its Comprehensive Plan for Tobacco and Nicotine Regulation, would help five million adult smokers to quit within one year, help 33 million people to avoid becoming regular smokers, and save more than eight million American lives by the end of the century – a truly game changing future for people who smoke and for public health overall.

Numerous independent scientific studies, funded largely by the FDA, the National Institutes of Health, and other U.S. federal government agencies, have demonstrated that using reduced nicotine content tobacco cigarettes helps smokers reduce their nicotine exposure and dependence, smoke fewer cigarettes per day, increase their number of smoke-free days, and double their quit attempts – all with minimal or no evidence of nicotine withdrawal or compensatory smoking behavior. VLN® helps you smoke less.

22nd Century Group has completed a successful pilot with VLN® in Chicago and is presently expanding commercial distribution in select states and markets. The Company intends to increase availability to a larger portion of adult smokers in the U.S. who are seeking a new tool to “help them smoke less.”